This multi-media program can be tailored for your audience and organized into two or three sections lasting between one hour and two hours.  First, Mr. Cooper performs an original set of politically engaged stand-up comedy.  Next, there is a presentation and dialogue between Mr. Cooper and Dr. Swindall about stand-up comedy as a vital space for political discussion.  This section includes a lively exploration of historical examples that blend comedy and political engagement along with their analysis.  Dr. Swindall and Mr. Cooper take questions from the audience and encourage conversation during this part of the program.  Finally, Mr. Cooper can offer a workshop and/or dialogue with any students who are interested in stand-up comedy, improvisational acting, and/or pursuing a career in the arts in New York City. This program can be adapted for online platforms like Zoom as necessary during the pandemic.

Responses to the Program from Students and Faculty: 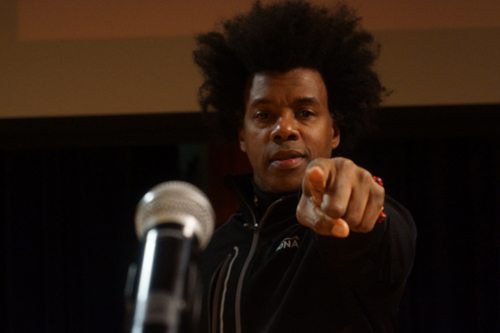 “You put together a FANTASTIC program this afternoon.  Thank you so much for organizing and facilitating the event. I hope that you are getting a lot of good responses!”

“That was a great way to celebrate Black History Month, informative, thought-provoking and of course very funny. Cooper is really a talented guy … [Swindall] and Cooper made an unlikely but really effective performance team. Thanks for putting it all together.”

“This event did a great job in discussing key African American figures that used comedy to make an impact with their lives.  Whether it was politics, racism, or everyday issues, the truth was always being spoken.  Grant Cooper himself witnessed some of the issues discussed by these prominent figures, such as the white lady covering her purse from the black man thinking that the man would rob her.  It is topics like these that really show what African Americans have to go through in their daily lives.  The great part of comedy is that ridiculous situations likes these are laughed at and the fact that comedians can see humor within it is what makes the art so impactful.”

“The comedian … was very funny.  He seemed pretty comfortable in front of the crowd that was mostly silent.  To me, this is admirable because he was able to continue through his routine unphased by the feedback of the audience or lack thereof. … Looking deeper into this for the sake of Black History Month, his jokes are a glimpse into modern racism.”

“I think that this was a really good show to do because it allow[ed] an African American to tell things from his perspective …. I agree with his point that comedy is a powerful tool to teach people lessons ….”

“Grant successfully adapts [Richard Pryor’s] style and uses the same line of thinking.  During Grant’s routine he talked about some different stereotypes against African Americans and exposed them for how stupid some of them truly are if you think about it.”

“… enjoyed comic relief mixed with real issues.  Grant Cooper was the comedian, and he was energetic and felt the mood of the room and curated his jokes for it.”

“Grant Cooper’s act was both hysterical and motivating … After listening to this act, I can understand how annoying it must be to live through racism today.  It seems as though there isn’t that much outright hate anymore, but there is still a cultural barrier that is unfortunately at the expense of African Americans.  Grant Cooper’s act showed that comedy is one way to cope with these little jabs that our society throws at African Americans.” 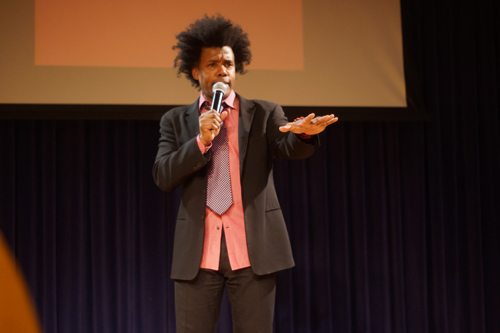 “The comedian was an African American man that grew up in a poor family and so he knew what it was like to experience racism and poverty firsthand.  Yet he used this to fuel his comedy.  He explained that comedy is a great way to view the world and express opinions because in its rawest form if it is the cold-cut truth presented in an enjoyable, real way.  I really liked the way he put it.  We know that we are going to experience differences of opinions and things that disgust and bother us.  Yet by approaching them with a comedic sentiment, we can disarm a lot of hate and still express how we feel. … I think this takes a lot of resolve for the comedian to do, especially when facing stark racism.  Yet it is inspiring to see him stay cheerful and real because it means that his method of comedy really works.”

“Traditionally, current events are told through newspapers, news on television and news articles on websites.  A place one might not expect to get the latest current events, however, is a comedy club.  The event I went to started off with a comedy show and while people definitely realized they were laughing, something that might not have been immediately apparent was that they were also getting informed.  Grant Cooper, the comedian, did an excellent job of getting a rise out of the audience while talking about very serious political issues.”

“I thought that his [Cooper’s] standup sketch was really fascinating and it really captured my attention…. His political commentary was delivered through humor, which really made it much more memorable and overall enjoyable for me.”